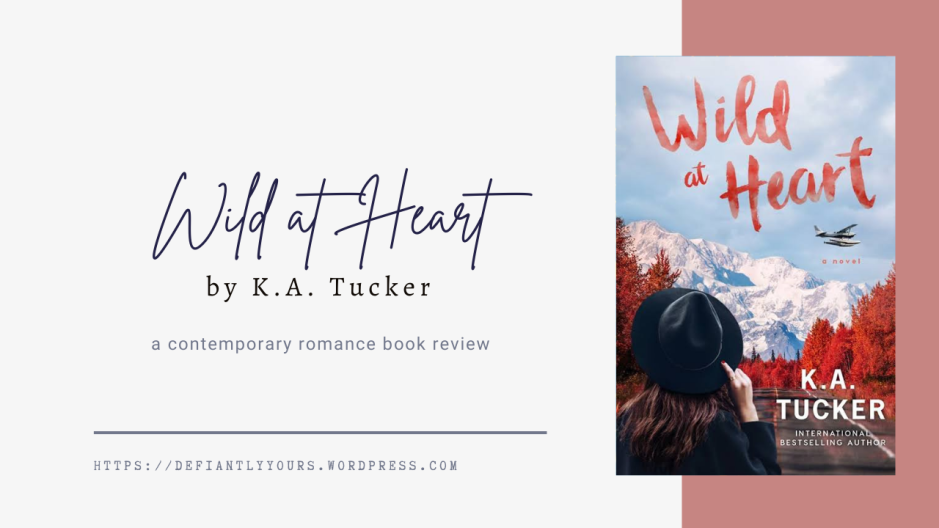 Calla Fletcher returns to Toronto a different person, struggling to find direction and still very much in love with the rugged bush pilot she left behind. When Jonah arrives on her doorstep with a proposition she can’t dismiss, she takes the leap and rushes back to Alaska to begin their exciting future together.

But Calla soon learns that even the best intentions can lead to broken promises, and that compromise comes with a hefty price—a log cabin in interior rural Alaska that feels as isolating as the western tundra.

With Jonah gone more than he’s home, one neighbor who insists on transforming her into a true Alaskan, and another who seems more likely to shoot her than come to her aid, Calla grapples with forging her own path. In a world with roaming wildlife that has her constantly watching over her shoulder and harsh conditions that stretch far beyond the cold, dark, winter months, just stepping outside her front door can be daunting.

This is not the future Calla had in mind, leaving her to fear that perhaps she is doomed to follow in her mother’s fleeing footsteps after all.

Some time last year, I remember finding out that KA Tucker would be writing a sequel to The Simple Wild. I initially could not control my excitement, and then I realized… What if the sequel ends with Calla and Jonah deciding that there’s no way they can stay together and ultimately breaking up? What if I don’t get my happily-ever-after? What if Calla or Jonah has a new love interest? I ended up messaging Kathleen on instagram because I needed to know what I was getting into, and she thankfully confirmed that yes, Wild at Heart is a romance. Phew. Crisis averted!

I’m actually writing this review after a recent reread. Given that Wild at Heart was released at a very uncertain time earlier this year, I could not fully appreciate it then. While the world hasn’t exactly recovered this time around, I don’t know, I guess I’m more settled. I’ve gotten used to the uncertainty, if you will. With Forever Wild releasing on December 1st, this seems like the perfect time for a reread, and to finally write and publish a review.

I want to start by saying that I personally think that Wild at Heart is more angsty than The Simple Wild. There were scenes that were absolutely painful to read, but oh so realistic. Wild at Heart has two central plot points – Calla needing to find herself (again), and what would happen to Calla and Jonah’s relationship. Wild at Heart opens with Calla deciding to move with Jonah to Alaska, and we follow their not-so-easy journey of finding a new place to live and finding new things to be passionate about.

Wild at Heart grappled with all the growing pains of building a lasting relationship. Calla and Jonah learn to compromise; when to push and to back off; and when to fight for what each wants. One thing I really like is how Calla and Jonah have no problem apologizing to each other, and that they they make the effort to communicate, no matter how hard it is. In this new town, it was easy for Jonah to find a new, meaningful job – though this means that he would need to fly out regularly, even staying out for weeks. On the flipside, Calla doesn’t have that easy of a time figuring out what she wants to do. Calla thought that her and Jonah’s charter company would be enough to make her feel fulfilled, but it’s not, especially with Jonah doing other things.

Watching Calla struggle broke my heart. With Jonah gone a lot, she’s lonely. Here she is doing everything the townsfolk asks of her, everything she thinks that Jonah needs from her, but nothing is enough. It doesn’t take long for me to figure out that despite Calla living in Alaska many months now, Alaska still is not home for her. Wild at Heart is very Calla-centric, because let’s admit it – she’s the once encountering challenge after challenge. Calla is the one who needs to decide who she is.

While Calla has a difficult time, Jonah can only do so much. I was initially frustrated at Jonah, wanting him to do more, but as I continued reading, I realized that he has already done so much. He has sacrificed too, and he has also moved away from what he knows. There’s only so much he can do for Calla. I recognize that Jonah has made missteps and mistakes; he also made the wrong call in opening up and saying things he should not say to the wrong person. None of this is intentional in his part though, and he is quick to realize his mistakes. Jonah is not perfect. One thing is for sure – Calla is the love of his life, and he will do anything for her. However, only Calla can find herself. Jonah can only support her, and this he does.

As the story progresses, we see Calla forming relationships of her own, and she realizes how important this is to her. Calla is initially stuck on doing everything for everyone, but eventually, we see her discover what else she wants and needs. What and who her non-negotiables are. As a reader, I cannot explain how rewarding it is when everything finally clicks for Calla. I actually had to pause because I needed to cry, because Calla deserves the world, and I love that she pushed herself and soldiered on. She finally shrugged off all the expectations, and all her fears that she’ll end up just like her mother. Calla is so strong, and her growth the past two books has been incredible.

I cannot even begin to explain how much I love this series, and these characters. I can’t even remember the last time I cried while reading, and here’s The Simple Wild and Wild at Heart, making me cry twice! Again, I just adore everything about these books so much! Watching Calla and Jonah’s relationship strengthen has been so satisfying, and I have no doubt that they can whether whatever problems that come their way together. They have the strongest love! Now, I just want Forever Wild to be one huge happy epilogue. I want happy and smiley Calla and Jonah! And maybe a wedding…? I just want good things!

To wrap up this (long) review, just in case it wasn’t clear… I love this series so much and I recommend it to anyone and everyone! Go and start with The Simple Wild ASAP. You won’t regret it, I promise!

One thought on “Review: Wild at Heart by KA Tucker”

Hi! I’m Lyra. I’ve been blogging since 2012, and I review mostly Romance, New Adult, and Young Adult titles. Contemporary and Fantasy novels are my favorite! Thank you for visiting my blog, and please feel free to follow, like and comment. Email me by clicking the icon below!