At thirty-three-years old Evangeline Starling’s life in Chicago is missing that special something. And when she’s passed over for promotion at work, Evie realizes she needs to make a change. Some time away to regain perspective might be just the thing. In a burst of impulsivity, she plans a holiday in a quaint English village. The holiday package comes with a temporary position at Much Ado About Books, the bookstore located beneath her rental apartment. There’s no better dream vacation for the bookish Evie, a life-long Shakespeare lover.

Not only is Evie swept up in running the delightful store as soon as she arrives, she’s drawn into the lives, loves and drama of the friendly villagers. Including Roane Robson, the charismatic and sexy farmer who tempts Evie every day with his friendly flirtations. Evie is determined to keep him at bay because a holiday romance can only end in heartbreak, right? But Evie can’t deny their connection and longs to trust in her handsome farmer that their whirlwind romance could turn in to the forever kind of love.

Much Ado About You opens with Evie, frustrated after being stood up by her date and then being passed over for a deserved promotion, quitting her job and deciding to spend a month-long working holiday in a fishing village in England called Alnster. Her incredible holiday package comes with a temporary position at the local bookstore Much Ado About Books, and Evie wastes no time leaving her old life behind for the unknown. Almost immediately after arriving in Alnster, Evie ingrains herself in the lives of the townspeople. and she befriends a charming cowboy named Roane. Sparks fly, but with Evie conscious of her stay being only a vacation, she makes it clear that she’s only looking for a friendship, and nothing else.

I admire Evie a lot. It takes a lot of courage to drop everything to temporarily go work at a bookstore in another continent, and I personally don’t think I would have been able to do it. Evie is very self-aware – she knows that her life right now is not what she expected, and she isn’t afraid to actually do something about it. Watching Evie find herself and finally belong in this little village was heartwarming – I especially enjoyed reading her meddle and improve some of the townspeople’s relationships. Roane, meanwhile, was refreshing to read about. He’s a sweet and nice guy, definitely an anti-alpha, and while it was obvious that he fell in love with Evie almost immediately, I loved how he followed her lead and never pushed her for more until she was ready. I have a soft spot for heroes who wear their hearts on their sleeves, and Roane is definitely one of them.

Evie and Roane’s relationship is somehow both slow burn and quick to happen – the attraction is immediate, but they take their time to build their friendship. Roane is never shy to extend a helping hand to Evie, and Evie becomes someone Roane can talk to. Evie finds a community in Alnster, and she and Roane navigate their growing relationship while at the same time looking out for the townspeople who need help. The supporting characters are some of my favorites – we have Roane’s cousin Caro, a shy and quiet woman who is under the thumb of a relative; Annie and Maggie, estranged mother and daughter; and star-crossed lovers Lucas and Viola. Oh, and of course, Shadow, Roane’s dog. I personally feel that they are the best parts of the book.

While Much Ado About You was a quick and enjoyable read, I was unfortunately looking for more. Despite Evie and Roane being the main characters of the story, I found at times that I preferred reading more about the townspeople than about them. I was more invested in the problems of the supporting characters than Evie and Roane’s. The story was also paced too slow at times – I feel like there were more scenes of Evie and Roane going to different places or Evie ordering books for the bookstore than there are scenes that explore the main conflicts of the book. The conflicts are instead bunched up near the end of the book, and I did not care for the conflict in Evie and Roane’s relationship in particular. It felt too forced, conflict for the sake of conflict.

All in all, I expected more from Much Ado About You. Samantha Young’s prior releases were some of my favorites, and I was hoping to love this book as much as I do her others. However, I still enjoyed the concept, the characters, and the setting. Roane was the cinnamon roll hero I was looking for, and Evie’s strength and determinedness made her an incredible heroine to read about. I would recommend Much Ado About You to readers looking for a mostly low angst romance, and of course, to Samantha Young fans. Hopefully her next release would be more my speed!

3 thoughts on “Review: Much Ado About You by Samantha Young” 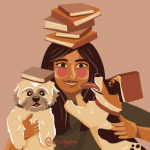 Hi! I’m Lyra. I’ve been blogging since 2012, and I review mostly Romance, New Adult, and Young Adult titles. Contemporary and Fantasy novels are my favorite! Thank you for visiting my blog, and please feel free to follow, like and comment. Email me by clicking the icon below!